The OECD Transfer Pricing Guidelines (OECD Guidelines) has established 5 common transfer pricing methods that are accepted by nearly all tax authorities and serve the purpose of enhancing transparency for tax administration.

Transfer pricing methodology can be divided into two categories, namely "Traditional Transaction Methods" and "Transactional Profit Methods". These iterations thereof are referred in UN Practical Manual with established transfer pricing regimes and are used to calculate or test the arm's length nature of profit and price, thereby establishing whether the financial transactions between the related parties are consistent within the arm's length principle.

A basic elaboration of each methods is provided below:

The main advantages of applying the CUP method in fact is the actual price in certain transaction is liable to the comparable analysis. However, this method is less likely to be the most suitable method especially for those complex transactions or those transactions that involved non-commoditised goods and services (tangible or intangible). 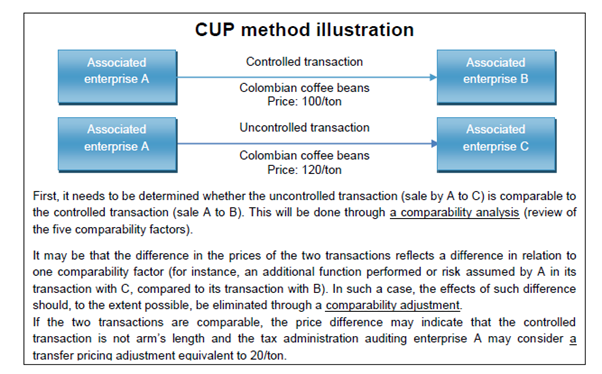 RPM focuses on the related party in performing the functions of selling and marketing in controlled transaction when the controlled parties sell its products to its related company which will further process the product and subsequently resell the products to independent parties, will then recede by an appropriate resale price margin.

RPM establishes the arm’s length by reference to the gross profit margin (GPM) earned by tested party (distributor) and compares this to the GPM earned by the comparable third party (comparable independent reseller). RPM is a relatively less direct transactional method as compared to the CUP, and the GPM will be influenced and varied by different accounting treatment between tested parties and comparables. When determining the comparables, it is crucial to consider the difference of characteristic of the products that are more likely to materially impact the price as compared to a profit margin. One of the significant advantage of RPM is the starting resale price is an independent price. The controlled transactions are being determined at the gross margin level, there will be less effect for the unrelated transfer pricing transactions. However, RPM is only tested on one side and it requires more selection of the tested parties. 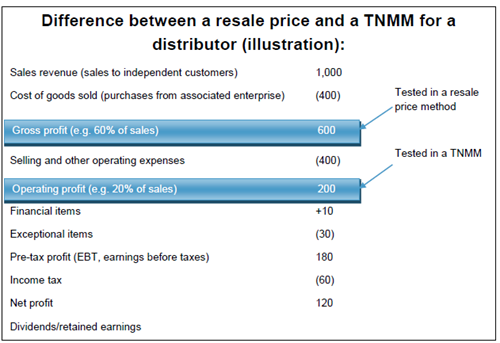 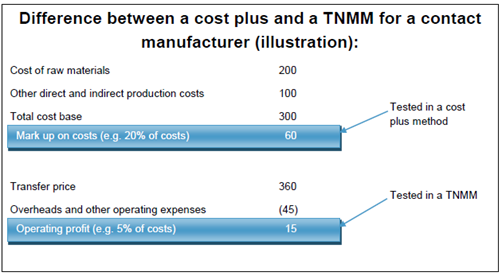 In Transactional Profit Methods, TNMM is a relatively disfavored method and is often applied to confirm the results from Traditional Transaction Methods. The Profit Split Method might be used in cases involving highly interrelated and complexed transaction that can’t be evaluated separately.

Profit Split Method is generally applied when both parties of controlled transactions contribute significant intangibles. This method is adopted when no comparable are available. Under this method, the total expected profits of all the related parties involved are estimated and then allocated among the respective parties. The Profit Split Methods seeks to eliminate the effect of special conditions on profits that earned by tested parties in controlled transactions. Typically, Profit Split Methods will first be applied to determine the basic arm’s length return or contribution for associated enterprises according to the functionalities of controlled transaction, risks incurred and asset used. The residual profit will then be allocated between the associated parties that are attributable to special conditions (e.g. effect of intangible property on price charged) based on the facts and circumstances.